I went through the entire website so you don’t have to.

Over the summer, I was tasked with an audit of the Cornish website. While this mainly entailed me working in my Marketing capacity, looking through the site with a critical eye for anything that could require adjusting, I constantly found myself reading with the eye of a student (I’ve attended Cornish for three years now, and am currently in my fourth year.) In a nonsensical (albeit expected) twist of reality, I’m now much closer to being an alumnus than a first year. To be honest, I didn’t think there was much more I could learn about this place. But I was quickly proven wrong.

Cornish offers various general majors, all of which I can name. I know lots about them, and the students in them. But I didn’t know nearly as much as I had assumed. No, attending classes, making friends, and even interviewing the students on campus had only taught me the very basics of the different departments. All I really knew about was theater, my own department, and I am not even aware of everything new the years below me are experiencing. So it was really about time I did a deep dive into my own school.

But there’s a lot of differences between the students studying within these majors. For example, within the general label of “theater,” you have Original Works (OWorks) and Musical Theater (MT). OWorks focuses more on writing and directing, in addition to acting; while MT focuses on music and dancing, in addition to acting. While both labeled “theater,” the course requirements and skills students are expected to graduate with are very different.

As a MT kid myself, I have to be selective about the OWorks classes I take (since my schedule doesn’t allow for many nonessential credits). I’ve taken a few playwriting classes and fully intend to take another before I graduate. I’m currently trying to survive my first ever Stage Combat class (a class I thought I’d never be able to take because of conflicts within my schedule). But I also have no room for or intention of taking any directing classes. I also know plenty of OWorks students who’ve chosen to take traditionally MT classes including, but certainly not limited to, Cabaret, private vocal lessons, and dance classes.

Flipping through the other majors made it very clear that every major contained many different disciplines, with differences similar to what I knew for MT and OWorks. Within art lies both Photography and Painting, which I’d always thought of as cousins, not sisters. Before looking through the Art page, I had actually believed Photography lay more under “Film” than “Art,” since I had been thinking of art in a very particular way (when it is a much broader category than imaginable).

And, of course, within Film lies all the components of Film, but split into specifics. Directing, Editing, Sound Design, Production, Writing… All very different skills within the same general major. And while the students do overlap and learn about the different specifics within their general major, each student I’ve met typically sees themselves as one or the combination of a few things within their major, i.e. a writer and director, a sound designer and editor, etc. And I would never expect a student to identify with everything under such a general label.

So, even within a major, there are major differences between the students it contains. A set designer and a stage manager are rarely the same person, after all — which could also be said about french horn players and violinists. And I had never once thought of Original Works as being the exact same as Musical Theater, so it should’ve been clear to me from the start that each major contained an incredible amount of variety, but I suppose I never truly understood how much variety until now. I used to just play the “what major are they,” game, but now I have to take my skills to the next level and get more specific in my assessment of instrument cases and sketch pads.

I know full well the faculty here are some of the most insanely accomplished people I’ve ever met, but I, once again, only seemed to know about the teachers within my major. People like Robin Lynn Smith, who always has another unbelievable tale of her life to share with us, or Kate Myre, who recounted the “Arthur Miller Story” as if Arther Miller personally asks every actor to reprise their role, spend their time at Cornish teaching students like me how to act. And while I knew the other faculty had to be as well accomplished, I was still amazed at what I found just by reading each teacher’s bio.

I was so interested in these teachers I had never met, I reached out to a few of them and conducted virtual interviews about their vastly different lives. From Ed Fotheringham, an instructor in illustration, who’s made illustrations for projects ranging from punk rock record covers to illustrations in The New Yorker, to Heather Bentley, an instructor in music, one of the West Coast’s most visible improvisatory musicians who can be seen performing on instruments like her electric seven-string and five-string violins. These interviews do not belong within this article and will be posted separately soon, so keep your eyes out!

Ask more questions to your teachers

As professionals in their chosen fields, they have so much to offer. I gained so much through these interviews and ended up chatting with each teacher for much longer than originally planned, despite not fitting in their typical student demographic. And if they were happy to talk to me for so long, I’m sure they’d love more one-on-ones with students within their usual instruction. 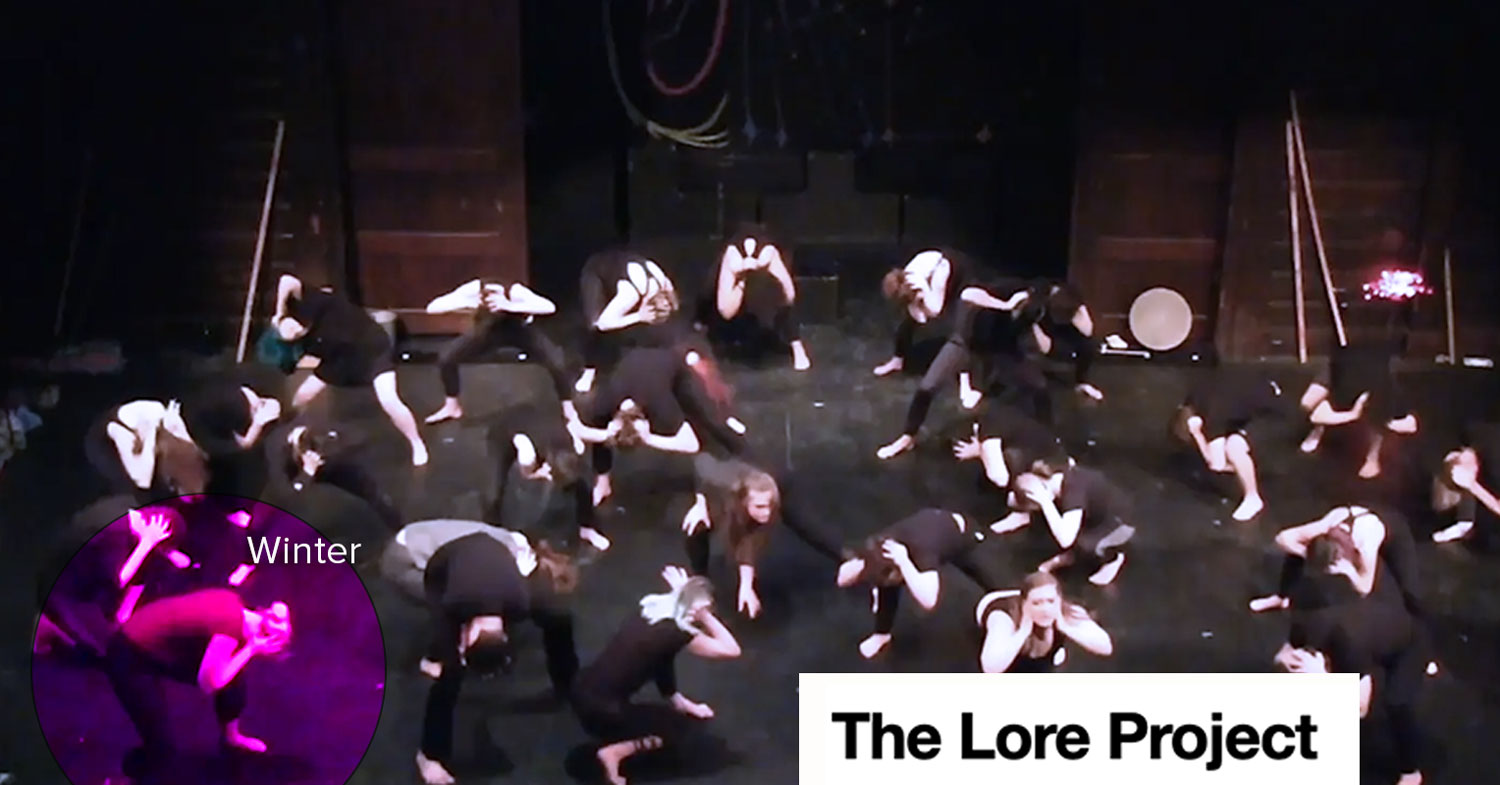 It’s 2019. I’m a first-year Musical Theater major at Cornish College of the Arts. And I’m tasked with participating in this thing called “The Lore Project.” I was double cast in a lore called “The Cowherd and the Weaver Girl” as the Goddess of Heaven (naturally) and… the cow (classic). This performance was filmed—supposedly to be kept in the Cornish records. Little did I know that in the summer of 2021, while doing an audit of the Cornish website, I would find our production of this lore, in which I crawled around on the chalk-covered ground mooing like a cow, right on the theater page. Easily accessible to the world. Watch it here >>

Of course, I watched the entire production and cried laughing at some of the antics that occurred (both on and off the film), so, despite the minor embarrassment, no harm was done.

Seeing this performance on the theater home page actually made me quite happy. It was a silly surprise, after all. I was also very happy to see numerous other theater performances on the page, including some clown performances from before I’d even arrived at Cornish. Every major’s page, similar to theater, contains numerous performances and/or pictures of work done by students. The music page has a whole section dedicated to student compositions, featuring one of my favorite bands from Cornish, King Sheim. And the film page features student films, created by and featuring Cornish students. I’d definitely recommend taking some time to watch the short films, listen to the songs, and to just enjoy the work created by students in other majors since everyone has been crafting truly fantastic pieces of work.

According to the Marketing team, the Cornish website is “always in a process of review, always in a process of improvement.” Some of these changes are invisible (or very quiet) like SEO optimization or content consolidation while others are obvious to regular visitors with design changes, content updates, and even some page reorganization/additions. The current priority is focused on making it more accessible to new and returning students. We want to improve user experience for prospective students and families, as well as the current community. We also want to continue highlighting the work both students and faculty have done and continue to do. The Cornish website is more than just a hub for “essential” information—it’s a deep pool of work dating back to before any of us were in attendance.

And while I looked through the website so you wouldn’t have to, I do encourage you to do a deep dive of your own in an effort to discover more about everything happening in and around Cornish. But remember the site is always evolving, adding new content, and making user experience better, so keep checking back. Maybe you’ll learn something about your program you didn’t know, or find yourself and your work highlighted.